The Reel Deal: Should Instagram try to replicate and overcome TikTok

The problem with being No. 1 is that there’s always someone out there trying to take the top spot away from you.

Once reigning supreme as the platform of choice among superstar content creators, Snapchat was eventually dethroned by Instagram with its lookalike Stories feature.

Now that TikTok seems ready to take over pole position in the race for influencers and their audiences, should Instagram try to take TikTok head on to maintain its supremacy?

It is an undisputed fact that Snapchat was first among the platforms to offer the Stories feature, much to users’ delight. Thanks to the value this provided brands and influencers, the pioneering Stories feature played a major role in Snapchat’s success in 2013.

Meanwhile, Instagram owners Meta took a “if you can’t beat ‘em, join ‘em” approach to addressing Snapchat’s success with Stories. But after toying with the idea of acquiring Snapchat, Meta later changed tactics and came up with Instagram’s own version of Stories instead.

It wasn’t long before the clone eclipsed the original, thanks to Instagram Stories’ superior features which included the ability to tag users and brands. It didn’t take very long for influencers to recognise how Instagram gave them far more viewership than Snapchat could, and to make the inevitable switch.

It wouldn’t be accurate to rule Snapchat as down for the count. At the time of writing, the platform continues to roll out new features such as Director Mode, Shared Story and the ability to change user names. It may be true to say, however, that outwitting Snapchat probably isn’t No. 1 on Instagram’s priority list at the moment.

Is TikTok beating Instagram at the same game today? 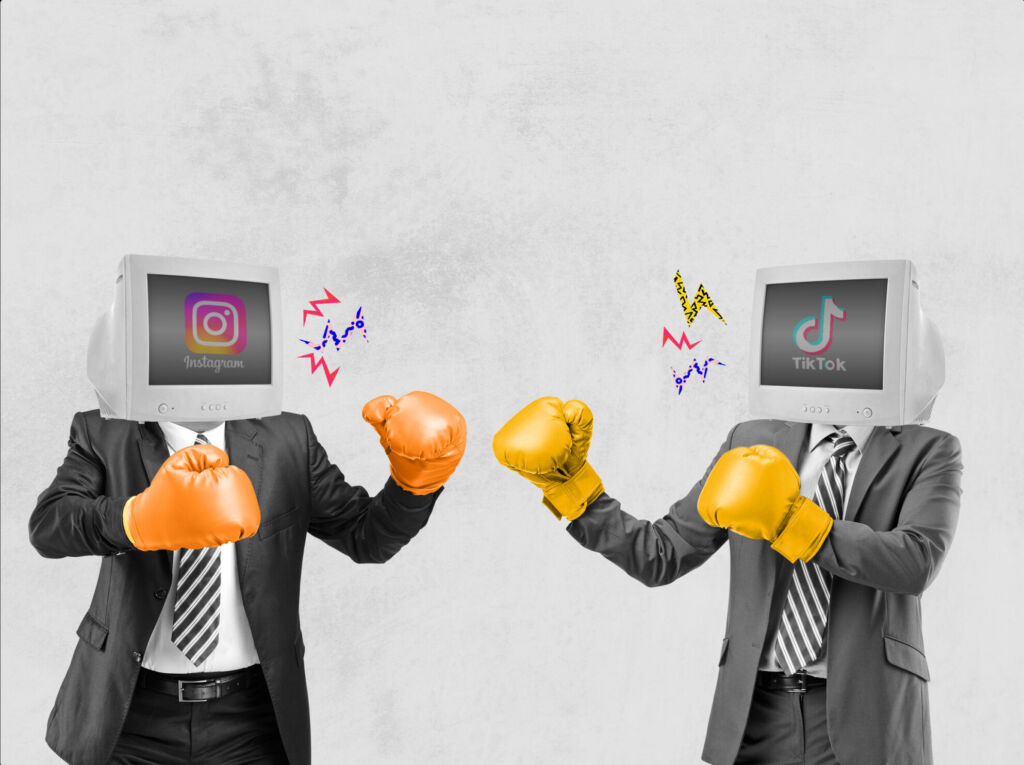 As Instagram’s latest rival, TikTok has gained considerable ground in terms of users, engagement and ad spend in the less than two years since the pandemic began. In response to this, Instagram launched Reels in 2020 with features that mirrored those for posting short-form videos on TikTok.

Here are a few of the salient statistics that reflect the current state of this rivalry:

As similar as they are on the outset, TikTok and Instagram do differ in terms of user experience and reach. TikTok videos are more ‘real’ or raw, and trend-focused, while Reels tend to look more professionally polished, seemingly with potentially more production value.

Where TikTok users generally find new content on their For You Page, Reels also make it possible for users to find a brand’s content outside of their feed.

When users started cross-posting content from TikTok to Reels, Instagram lessened exposure for videos with the TikTok watermark. This hasn’t stopped brands from posting on Reels, but rather led them to adjust or create Reels-specific content.

Is everyone on board with Instagram’s tactics?

It may seem only natural for Instagram to have taken the steps it has to keep up with their users’ demands. However, not everybody seems to be happy about the way Instagram is doing what it thinks it must to stay relevant.

Kylie Jenner, one of Instagram’s most-followed people, expressed a wish for the platform to return to its roots as a photo-sharing app, which was reposted by her sister, Kim Kardashian.

Similar expressions of dismay cropped up on TikTok itself following an announcement of the full screen feature which makes Instagram look more like TikTok.

Now take a quick look back at how Instagram has been able to power through the rise of Snapchat by “doing what it does, only better”. With the same strategy now in play, Instagram has held its ground against TikTok so far, and it may be safe to say it isn’t going away any time soon.

Whether this strategy will enable Instagram to overcome TikTok—and the platforms that are sure to come after it—has yet to be seen. While feedback from the Kardashians does carry significant weight, the fact that their sentiments have been echoed by several users should have been a major wake-up call in itself.

Instagram does seem to have responded to this call by rethinking its full screen feature. But perhaps what Instagram needs to think about is what made it the social media giant it is today. What was it that made users flock to it in the first place, when it first appeared?

Digital marketing in general has always been in a state of flux: what may have worked for a channel once, may become outdated faster than you can say the word ‘algorithm’.

Just because adapting similar features may have worked for Instagram with Snapchat before, doesn’t necessarily mean the same strategy will work for it against TikTok now.

Maybe Instagram would do better to focus on “what makes it Instagram” instead of “what makes it more like TikTok”. Otherwise, it could very well lose its unique identity which loyal users find themselves longing for, and unwittingly re-invent itself as a “forever clone of the next big thing”.

Knowing the right social media platform for your brand is key to engaging with your target audience effectively. Mediatropy can help you with producing the right content and with making sure your content reaches the right audiences.

Not sure whether your brand should be on Instagram or TikTok (or whether they should be on either of them)? Let’s talk about the best way for you to use social media, today.

Don't be shy — say hello and we'll be glad to kickstart your next exciting digital marketing journey.